Actually, it’s not a miracle, but knowing what to and not to do. 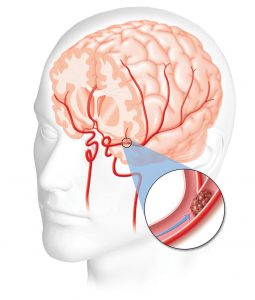 What saved my grandmother

4) Take a walk two times a day outside.

6) Exercises that stretches her body and stimulates various accupoints in her body.

7) Do arm exercises with weights or full bottles.

8) Taking coQ10 and other vitamins.

In 2008, we lost our grandfather. It was an overwhelmingly devastating experience for my entire family. What’s worse was both my grandparents lived far from us. Another frightening thing was, my grandmother fell ill almost the exact same time. Perhaps all this pressure was getting to her and she finally cracked, or maybe it was just bad timing. She had a stroke and lost much of her mobility. She couldn’t walk without falling down, she was barely able to hold a bowl without it slipping and she had signs of memory loss, as she didn’t remember something we told her a few minutes earlier. Not to mention, her hair went entirely white and she had insomnia every single night. 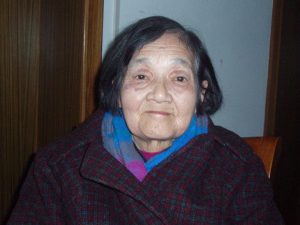 (My grandmother around the time she had the stroke. We had to dye her hair so she looked a bit younger!)

My mother became determined to have her live with us. Most of our relatives said any work we did would’ve been wasted as she wouldn’t live long. Nevertheless, these comments didn’t stop my mum.

We got her taking medication for the stroke and one of the first things we did or made she she did was cut all eggs and meat out of her diet. She ate mostly vegetables and rice. This change in lifestyle helped her recover a little to the point where she could at least walk without falling.

I still remember hearing horror stories about how my grandmother went out one day and the cold weather was so bad she literally dropped on the ground, saying, “she couldn’t make it.” That frightened my mum to death. Only after a rest on the chair and a cup of warm water did she start feeling better. 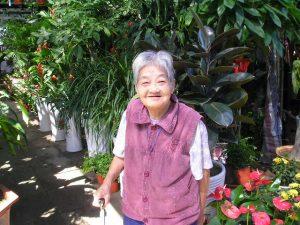 In 2009, my grandmother came to live with us for a year. At this moment, you can already see major improvements in her.

Having her move in with us was one of the best decisions we made, because as we were able to keep an eye on her, we kind of forced her to move around and exercise. You’ve got no idea just how much time and effort it took us to make sure she does her daily exercises. I even made a joke that if she didn’t do them, she’d deserve a smack bum and that I’d have to discipline her, which was so hilarious because usually, the parents or grandparents are the ones who disciple kids not the other way around. .

In addition to eating vegetables, cutting off all meat and eggs, and only having fish once a week, we even bought a treadmill for her to use. We also got her all kinds of tools to help her walk outside.

Check out these photos of her exercising: 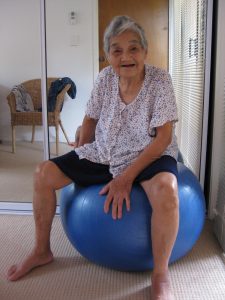 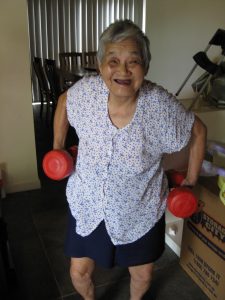 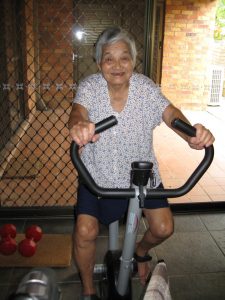 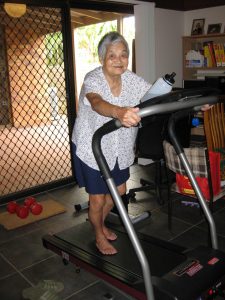 Just look at this old lady on the treadmill, exercise bike and lifting weights. At that point, nobody even believed this was her. It must have been her evil twin who has taken over her body!

Getting her to keep up the exercises was often the most difficult part. We have to remind her all times, and she often slacked off after forgetting for a day.

We also bought her a huge load of coQ10 for her to take. This strengthened her heart and helped alongside with the exercises and diet.

A new routine of Massaging Each Night

My aunt came to visit one day and she was very into Chinese Medicine. She was extremely helpful in telling us what we can do to improve my grandmother’s health. She suggested that we massage certain accupressure points of the body to improve health. She taught us all about guasha, baguan and many other techniques where we basically done to remove and dispel the stagnated blood, damaged tissue and hep increase blood flow and healing. After she massaged our arms, it would be sore and often, a big purple bruise even appeared. It felt different from normal bruises though, the pain was similar muscle growth pain. After about a week, the bruise faded, but the most miraculous thing was, when we massaged that part of the body again, it was no longer as sore, and bruising didn’t appear.

My mother really started believing in the massage after seeing the results. However, she had her own set of theories, that it would be more effective to massage the entire body rather than only certain accupoints. She also believed that it was the most beneficial when you massaged with great strength felt pain in the area. So, daily massaging became a painful routine that whenever it was our turn to be massaged, we’d wince, complain, whinge and moan. Of course, no serious injury done here, this was all within the pain we could take. My dad would often joke about the fact that my mother was sadist. However, we all agreed the theory made sense, because the harder you massage, you’re likely to remove the bad things inside your body, which will make healing faster.

She also explained that when our body isn’t damaged and is in perfect condition, massaging should not cause pain. Pain only happens because something is wrong, because when you massage the same areas in most kids, they are ticklish.

This was when mum started massaging my grandmother’s entire body, tarting from the head and ending with toes every night. At first, my grandmother’s body was extremely stiff. It felt as if most of her leg tissues were dying. Even her feet were numb. Yet the more my mum massaged her, her lefts softened and she even began feeling ticklish.

The craziest thing was, we noticed a gradual, yet obvious change in her. Her white hair started turning black, she started sleeping a lot better and what’s unbelievable is, she not only can lift plates and bowls three times of the weight in the past, she can also carry giant buckets of water in and out of the house as if they weighed was nothing! I’m dead set serious. I will never forget, one day we were out and it started to rain. My family has a tradition to collect rain water into buckets to use for flowering. When we went back home, we saw about 10 buckets of water inside. My grandmother had gotten the bucket, filled it up with water, then lifted all of them inside, ALONE! Can you believe it? (I certainly couldn’t!)

Another significant improvement was her ability to think. Back in 2008, she was almost like a robot who simply nodded when you spoke to her.Now, she’s always leading the conversation and she comes up with the craziest theories ever, such as why our neighbours turned the light off at 7pm instead of 7:30pm! It’s as if something revived her mind.

My grandmother shocked all her friends!

My grandmother visited her friends and everyone nearly died in shock. She was a completely different person!

When I said before that her mind was revived, I meant what I said. She thought of this great evil plot to make me crazy, by buying delicious foods known as youtiao and stinky tofu, and then asked my mum to take photos of her while she’s eating them, because she wanted to see my mouth water and going all mad with envy because I loved these foods so much but couldn’t go back to eat it with them.

Can you believe this? My grandmother plotting evil towards me?! What has the world become? 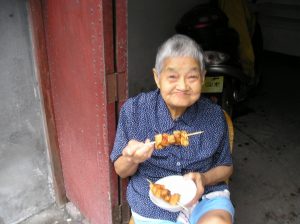 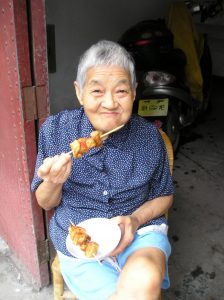 Just look at her sneaky and playful face in those photos. A person not in good health conditions can’t possibly make these expressions. Remember in 2008, she nearly looked like a statue with no life i her eyes? Now, she seems like an entirely different person! She looked almost 10 years younger than before, alive and energetic, always thinking of the next thing to say in a conversation and her memory has improved too!

Every single one of our relatives said: It’s a miracle that she’s alive! How on earth did you do it?

Remember: We worked towards our own miracle in helping her recover. Of course, if her stroke was worse, it may have been too late to fix, like my grandfather. However, it’s never too late to start now by eating healthier and being more active. Don’t forget to massage your entire body, it really does give you so much benefits.

When a person is in danger of having a stroke or heart attack, the most important thing is to stay well away from meat and eggs, focus on a vegetarian diet, with only fish. This will save many people’s lives! 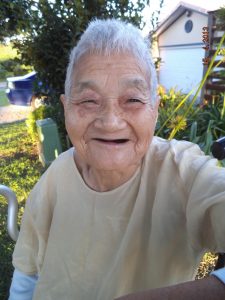 My grandmother, happy and healthy in 2013.

Fitness isn’t something any of us can take for granted. There are a significant number of benefits from working out and taking care of ourselves that we just can’t overlook. Those in better shape have much fewer health issues, are often happier and it can even lead to more productive and successful lives both in…

Back when I was a kid, we had to do these exercises 2 times a day at school. I remember I always had an itchy eye so I would use this opportunity to scratch my eyes instead of the proper accupoint. I think just like massage, this is an excellent way to de-stress the eyes….

Sometimes, people may have the interpretation that exercising after you eat will be better because you’re working off the food. From what I’ve read, it is good to walk, but vigorous exercises aren’t recommended. That’s because your stomach is trying to digest the food. If you do some high intensive exercises, all your blood will…

Often, we overlook what our bodies are telling us. In fact, even when we’re not getting enough sleep or eating properly, our bodies often show symptoms. The important thing is that we recognize these symptoms and do something about it! Not getting enough Sleep You may experience stuffiness on your chest, a slight discomfort around your stomach…

As we age, our eyes degenerate. Heck, even from the time we were born until now, so many of us have to wear glasses. And, you’ve all heard of cataracts, right? That misty thing that half blinds us. Let me tell you what boost the health of our eyes. The Vitamins and Minerals for Eye…

There’s a number of things we can do to keep us in glowing, healthy conditions in the morning! Let me share a few of my secrets. 1. Drink a Cup of Warm Water (Feel free to add some lemon juice.) Warm water in the morning is beneficial in many ways. It flushes out your kidneys,…